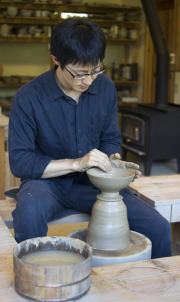 Born between a physicist's father and a pianist's mother in Chiba, Japan(October 22, 1972), Jun NAKANO graduated from Social Science Section, Department of Literature at The University of Tokyo in 1996 .

At the first year of the university, he met clay art first, and on the very day decided making pottery as a lifelong work. Then he got an electric small kiln and started clay art work.

For three years and a half after graduation, he worked as an editorial staff of a magazine at Shueisha, a large publishing company in Japan, and became acquainted with many talented people including the photographer, Mr. Yoshihiro Tatsuki. (Mr. Tatsuki is taking photographs for Nakano's solo exhibitions over ten years from his first exibition)

At the end of 1999, he left Shueisha and concentrated on clay art work.

In May 2000, he held the first solo exibition at Matsuya Ginza at the age of 27, and step by step the place of exibition increased in number in Nagoya, Kobe, and Okayama. Now he is holding the new work exibition periodically in those cities.

Although the studio was located in Tateno-cho, Nerima-ku, Tokyo at the beginning, he moved to Nagaramachi, Chosei-gun, Chiba at the end of 2006, and devoted to work in the quiet environment surrounded by the rice field and the natural woodland.

In order to keep good pace of creation, he is holding the solo exhibition only 2 or 3 times a year.